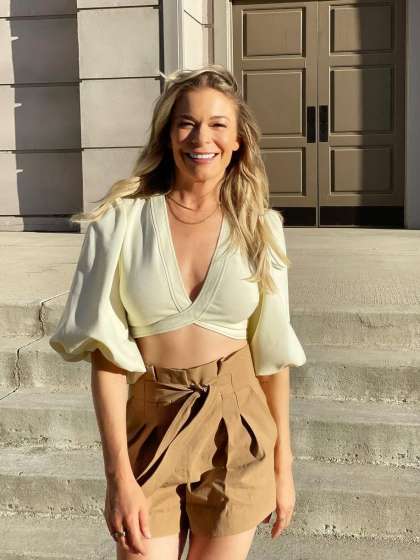 Compare your height to LeAnn Rimes

Who is LeAnn Rimes?

The girl began singing when she was just two. At the age of five, she already won her first music competition. The music career of Rimes started when she was 13.

Rimes is mostly known as a prominent country singer – she has released 16 studio albums. However, she is also an actress. One of her hit projects was Coyote Ugly. In addition, she can be seen in American Dreams, Holly Hobbie and Friends: Christmas Wishes, Northern Lights, Good Intentions, Drop Dead Diva, Anger Management and It's Christmas, Eve.

The singer is straight. She is married to actor Eddie Cibrian. The couple went down the aisle in 2011. Before that, she was married to American dancer Dean Sheremet from 2002 to 2010.

LeAnn and Eddie do not have kids, but she is a stepmother to his two sons, Mason and Jake, from his previous marriage.

LeAnn appeared in Jackson, MS. She is the daughter of Wilbur (a salesman) and Belinda (a homemaker) Rimes. Wilbur was the manager and producer of the girl at the beginning of her career. She is the only child in the family.

As it is known, Rimes is a Christian.

The singer is a big fan of sports. She said she would play softball daily if she could.

LeAnn is super smart and she went to high school at the age of 11.

She met her now-husband on the set of the Lifetime Movie Northern Lights.