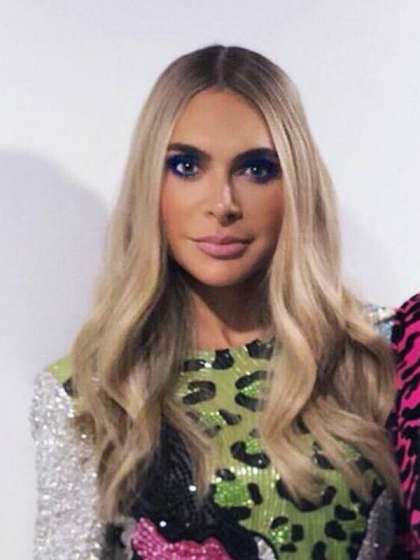 Compare your height to Ayda Field

Who is Ayda Field?

Ayda Field is a Turkish-American film and TV actress and has also gained more fame on British TV as a competition judge.

Right after graduating from high school at Harvard-Westlake in 1997, she made a screen debut in a very small roles in the sitcoms City Guys in 1998 and Arli$$ in 2000.

She began to garner fame when she starred as Angela Moroni in the soap, Days of our Lives in 2000-01 and backed this up with a role in Young Blades in 2001.

Ayda is straight and after dating singer Robbie Williams for a little over 4 years, they finally wedded each other in 2010 in a private home ceremony in Beverly Hills. He proposed to her live on a radio interview in November 2009 but after admitting that proposal was bogus, he made it real on 2009 Christmas.

Born Ayda Sabahat Evecan, she is the only child of Turkish Haldun Evecan and American Gwen Field. She has a half-brother by the name, Dylan.

Born to a Muslim dad and Jewish mom, she has never spoken about what religion she practices as she possesses both identities.

Due to her father’s absence at her wedding, she and Robbie had another elaborate wedding in Turkey.

She is quite fluent in Turkish and English but also speaks Italian and French.