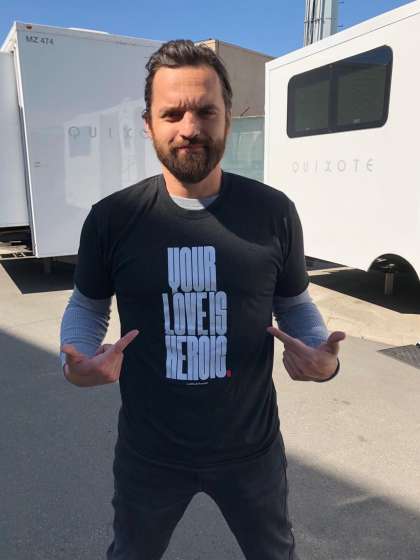 Compare your height to Jake Johnson

Who is Jake Johnson?

Jake Johnson is an actor, producer, screenwriter and comedian from the USA.

He studied at New York University's Tisch School of the Arts and then moved to Los Angeles to pursue an acting career there.

Since 2006, he has appeared in several popular TV series: Lie to Me, Flashforward, Curb Your Enthusiasm.

In addition, he often took part in various comedy shows.

Johnson was seen in many great projects, including Paper Heart, 21 Jump Street, Get Him to the Greek, and Safety Not Guaranteed.

However, he became truly popular after his brilliant role in the sitcom New Girl.

Jake also played the role of Tom Cruise’s sidekick in the film The Mummy.

Jake is straight. He got married to an artist named Erin Payne in 2006. Since then, the couple welcomed twin daughters.

Before becoming a family man, he had romances with Erin Payne, Anna Kendrick, Megan Fox, and Olivia Wilde.

He was born in the family of an artist and a car dealer.

His mother is Eve Johnson and his father is Ken Weinberger. They separated when Jake was a boy.

Jake has siblings: Dan and Rachel.

Jake’s father is Jewish and his mother is Catholic. The actor is Jewish.

In 2002, Johnson won two prizes for his writing skills.

Before becoming a famous actor, the man was a waiter and later a production assistant to make a leaving.

His full name is Mark Jake and he was named in honor of his late uncle Mark.

Jake likes basketball and was a great player.