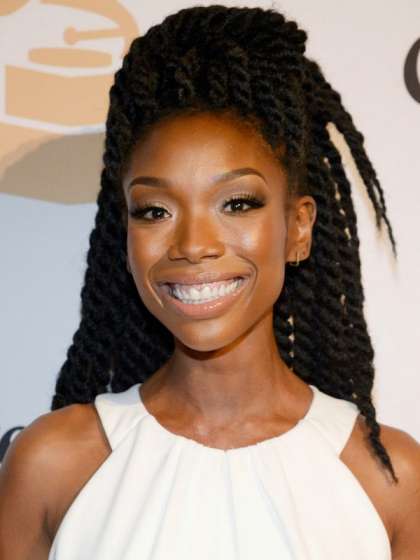 Compare your height to Brandy Norwood

Who is Brandy Norwood?

Brandy Norwood is a talented American actress and singer.

Brandy got her initial screen exposure in 1990 through the horror film, Arachnophobia. By 1993, she got a main role in the sitcom Thea. 3 years later, she got a lead role in yet another sitcom, Moesha, which aired for 6 seasons.

Brandy has attained much recognition through the single, The Boy Is Mine, which she sang alongside Monica. This song became a huge success as it earned her a Grammy Award.

Brandy is straight. Over the years, she has been romantically involved with various popular personalities, among who include Usher, Robert Smith, Quentin Richardson, Flo Rida and Terrence Jenkins.

Brandy has a couple of relatives who have created a successful career in the entertainment industry. For one, her father Willie Norwood was a gospel singer while the well-known singer, Ray J is her brother.

Snopp Dogg and Sasha Banks are both her cousins.

As a product of a past relationship with the producer Robert Smith, Brandy has a daughter named Sy'rai.

Brandy has been a Christian right from her childhood. Nevertheless, at various points in her life, she faced major tragic events that made her lose her faith in God. However, in the midst of these circumstances, she recalls those struggles reuniting her with God. She also stated that she struggled with depression but God brought her out of it and placed her back on the right track career-wise.