Her passion to Halloween party and daedal costumes began at the age of 27. Since that time, the model hasn’t stopped impressing and intriguing her fans with the Halloween looks and this year we’re looking forward to see the character she’s going to implement. Now, let’s look back to all the previous costumes that Heidi Klum used to wear.
2017 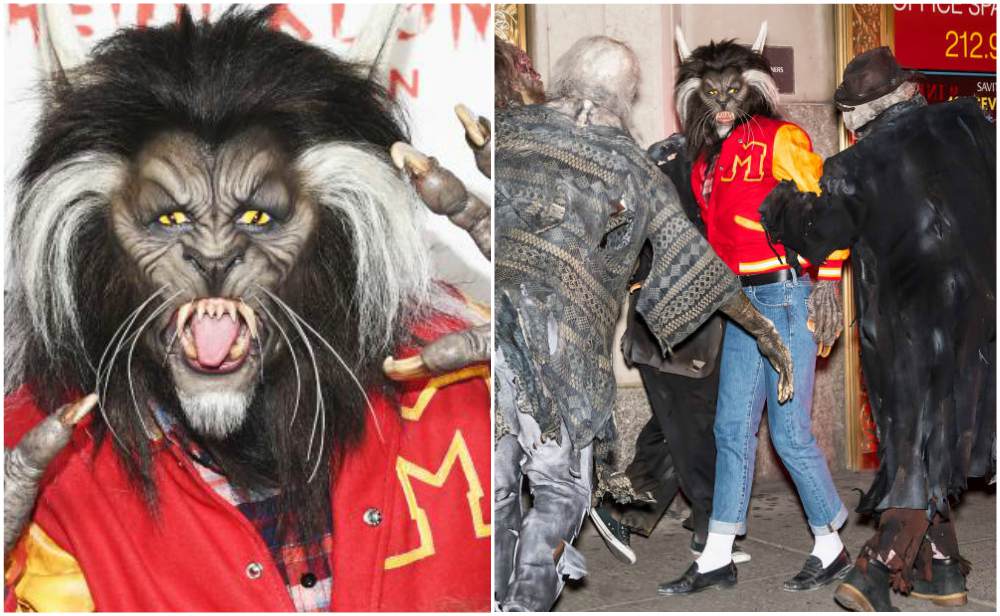 This year Heidi arrived at her Halloween party dressed like Michael Jackson from the iconic Thriller video.

Last year, Heidi, probably, got tired from putting lots of make-up and transforming into some popular personages. Instead, she found 5 blonde girls and let them transform into her. As a result, the audience met 6 Heidis wearing the same clothes and having the same hairstyle. 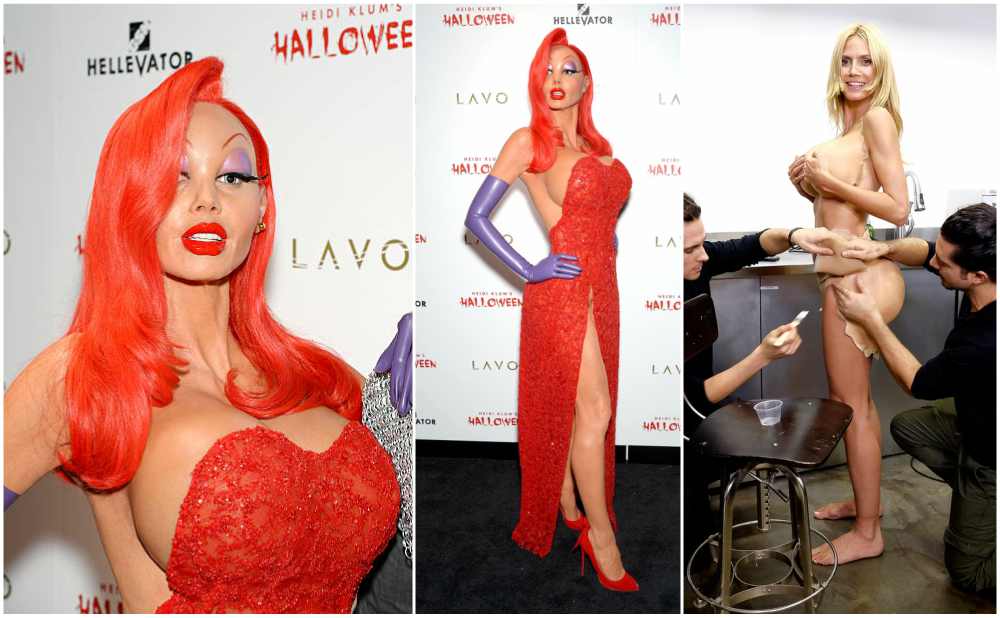 That year, Heidi Klum established her make up record – it took her 10 hours to transform into Jessica Rabbit. The reason is that not only her face was changed, but her entire body. Jessica Rabbit is famous for her curves, so to correspond to her look, Heidi was established prosthetics to her breasts and buttocks. 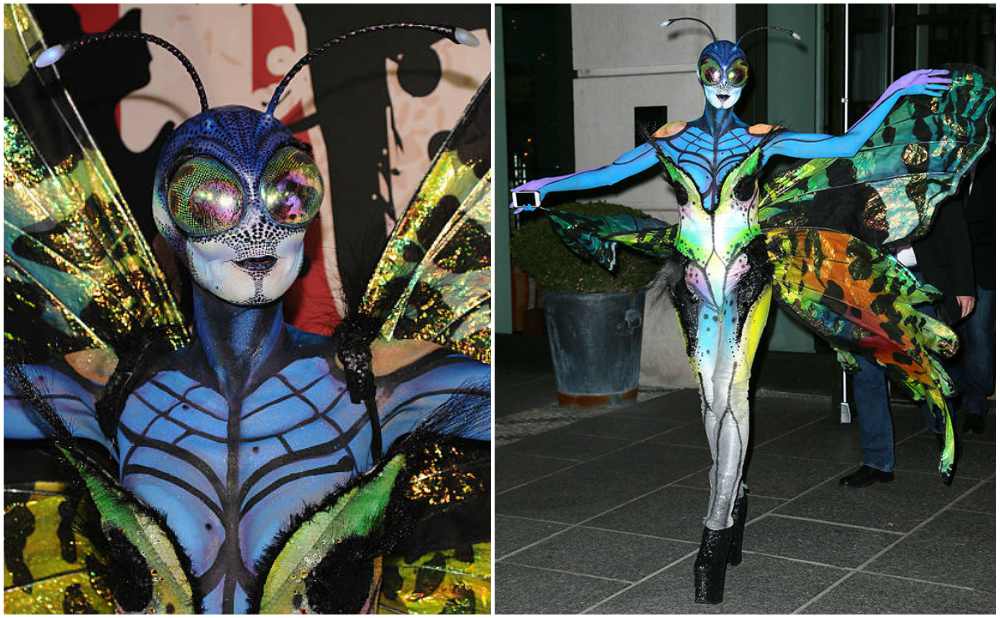 In order to surprise everyone, in 2014 Heidi Klum underwent 5-hour metamorphose into a butterfly. Her choice fell on a butterfly, because a precious person calls her like this. The costume was very bright, colorful and pretty. Surprisingly, the model also likes painting butterflies. 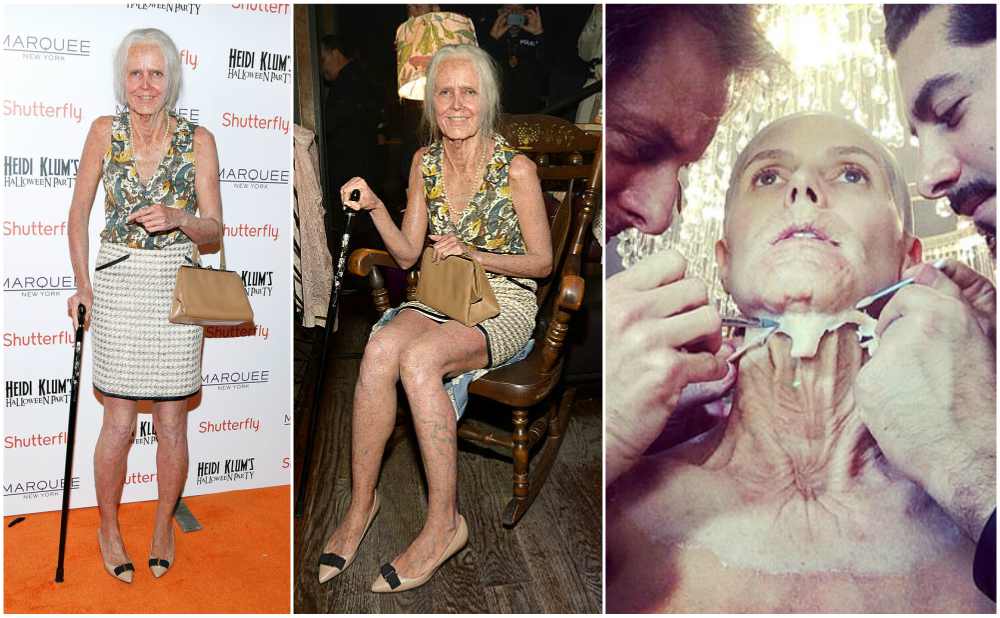 In 2013, Heidi Klum became an old version of herself. She turned into a 95-year-old woman with varicose veins on her legs, wrinkles, cataract eyes and a stick to help her moving. She looked so plausibly that the security men didn’t want to let her in to her own Halloween party. She was also given a rocking chair to have some rest. 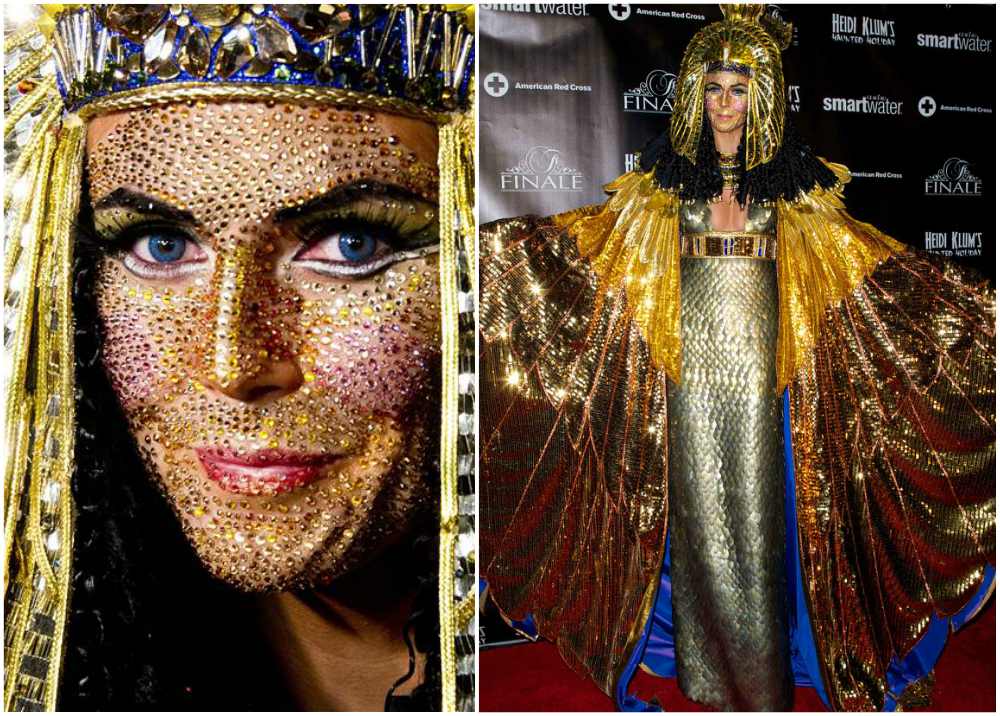 Halloween plans were mixed up by the Hurricane Sandy that hit that year. For that reason, the celebration was delayed, but still, Heidi dressed up as a Cleopatra and hit the party hard in December. Her face was decorated by many sparkling crystals. 2012 was a different year for Heidi, as after a few ugly costumes in a row, she wanted to become somebody beautiful. 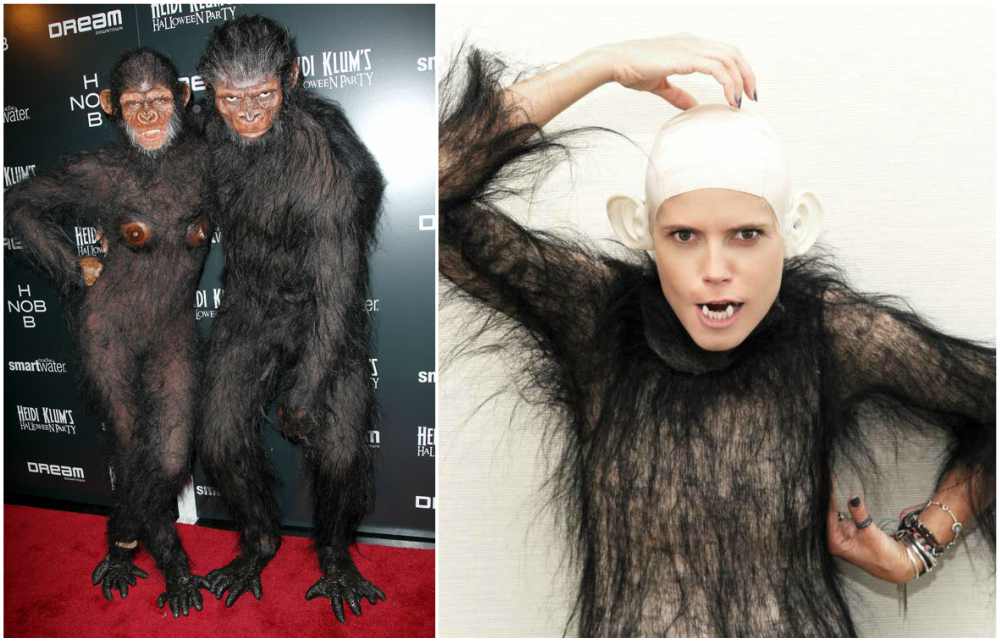 2011 was marked with two Halloween parties. For one of them, the one in NYC, she and Seal transformed into a pair of apes. Unfortunately, they split not long after the party, though they seemed so deeply in love. 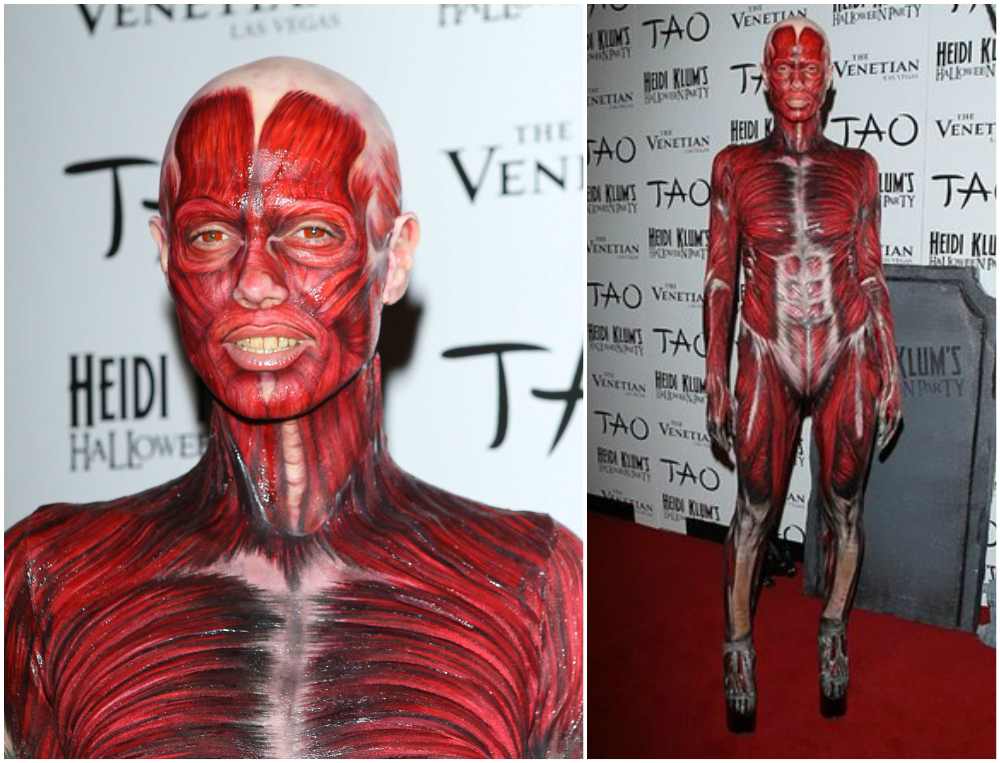 At another party, held in LA, Heidi Klum appeared like the alive remains of human body. She looked like a person without skin. 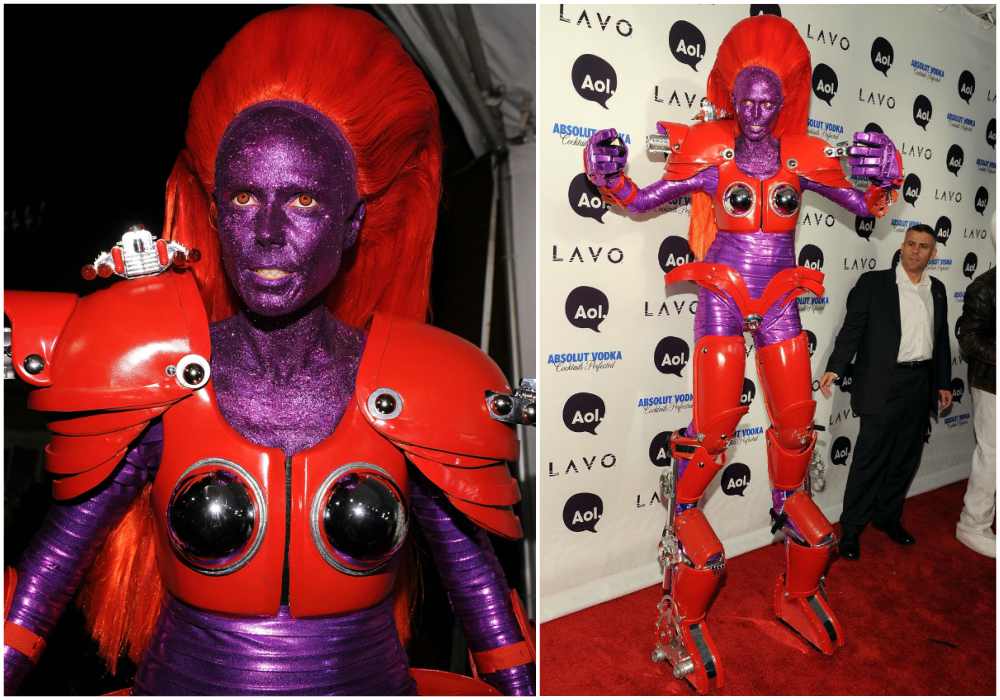 For that party she chose the costume of an Iron Man that was combined with Mystique: her clothes were completely of iron, her skin was colored purple and her hair was red. Her boots made her extremely high and hardly recognizable. 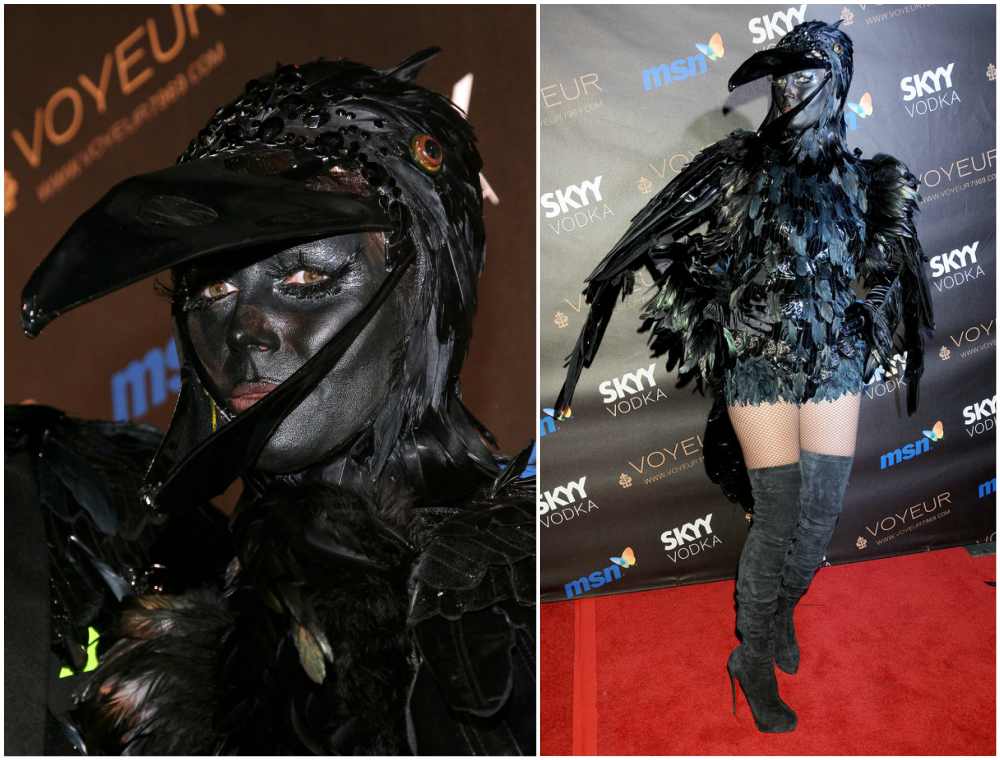 In 2009, Heidi dressed as a crow. She was covered with feather and had a huge beak. Actually, the star complained about the costume of a crow as it didn’t let her see everything, drink or eat. She said, her husband couldn’t drive normally because of the beak, so that was the question whether it was worth it or not. 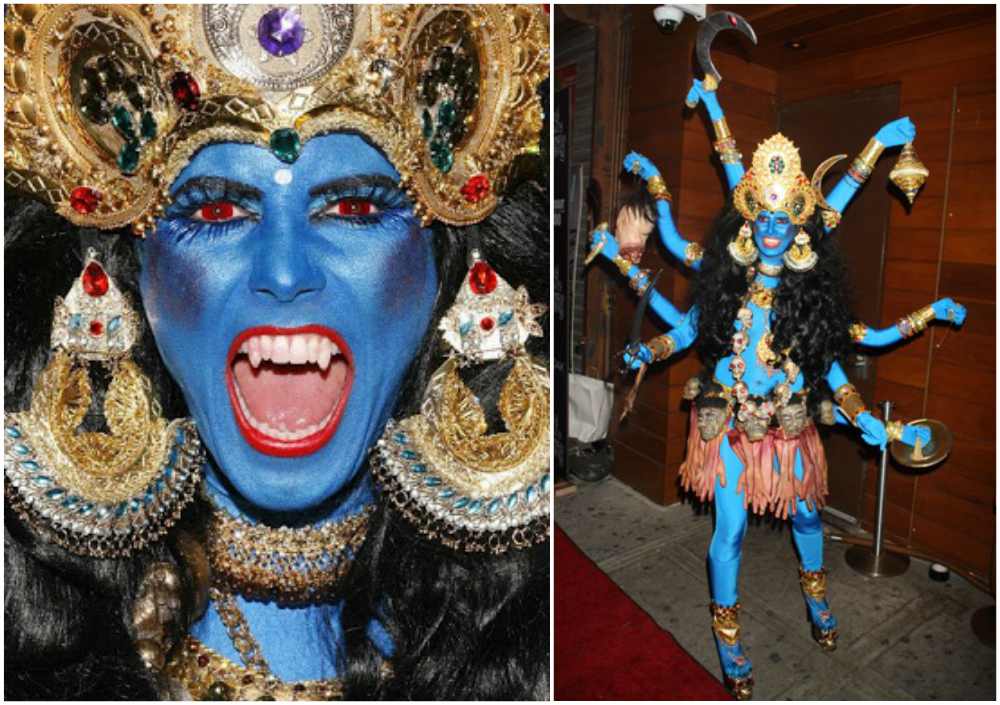 Heidi was probably impressed by their trip to India, because in 2008, she wore a costume of an evil Indian goddess Kali. 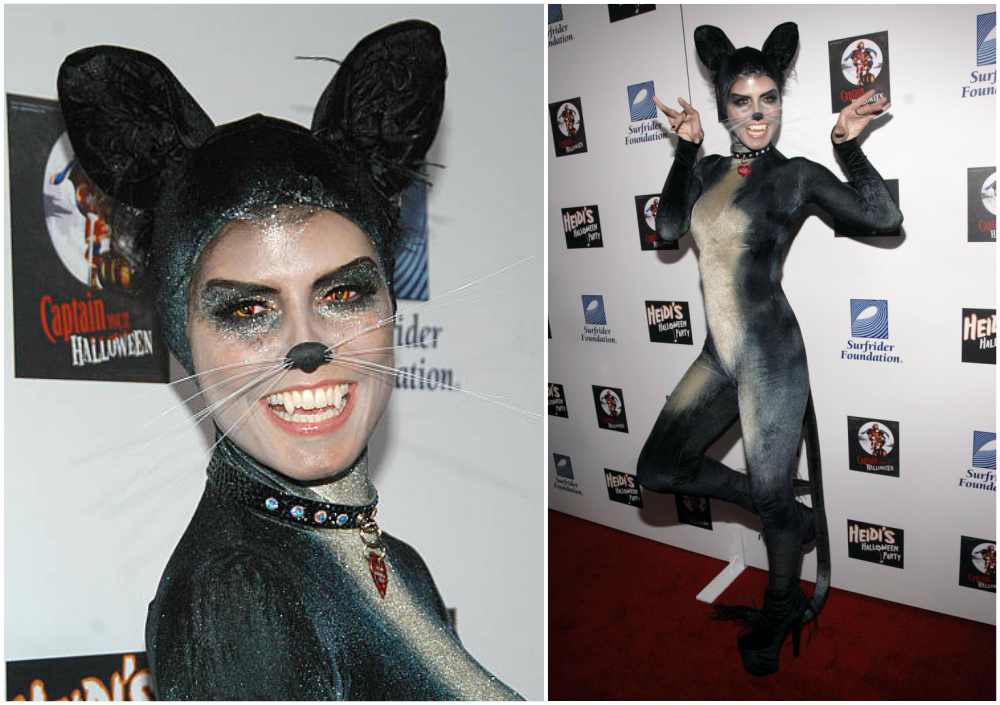 In 2007, Heidi Klum metamorphosed into a huge subway cat. The German model really liked that image, because it gave her freedom of movements, so she felt as a queen of the night indeed. Gray bodysuit, black makeup and claws made her personage complete. 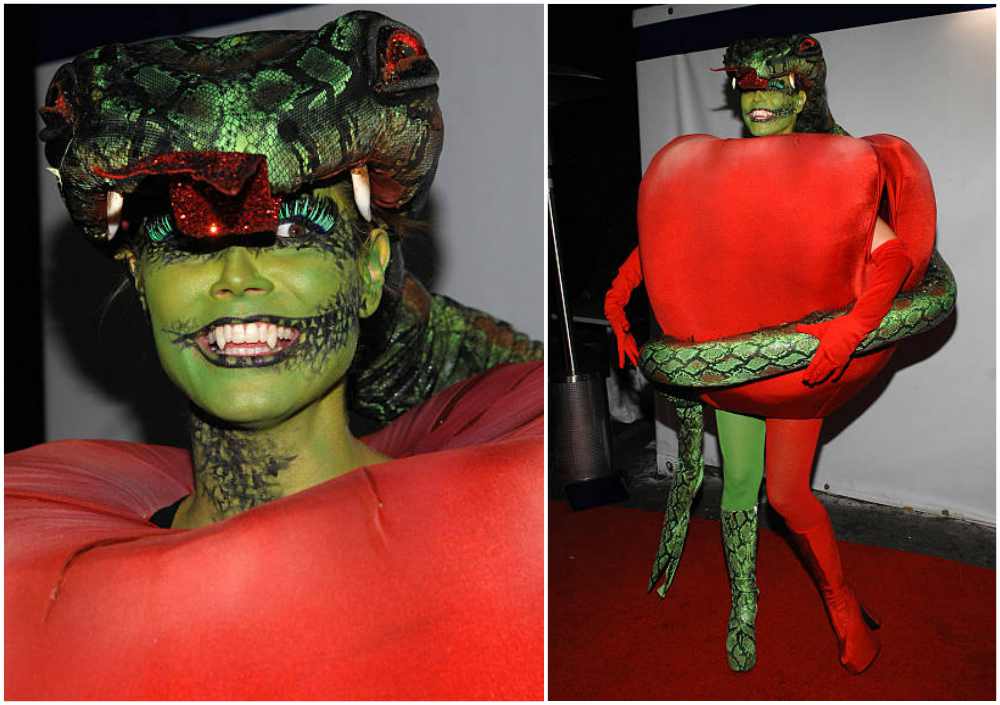 Heidi is known for not looking for easy ways. She was a forbidden fruit wrapped with a serpent. The party that should bring much fun caused only lots of problems. Heidi couldn’t sit. She was only too huge to get into her own car, so the apple was fitted on her body only the last moment. Her arms were trapped in it, so Heidi couldn’t drink or eat all the night. 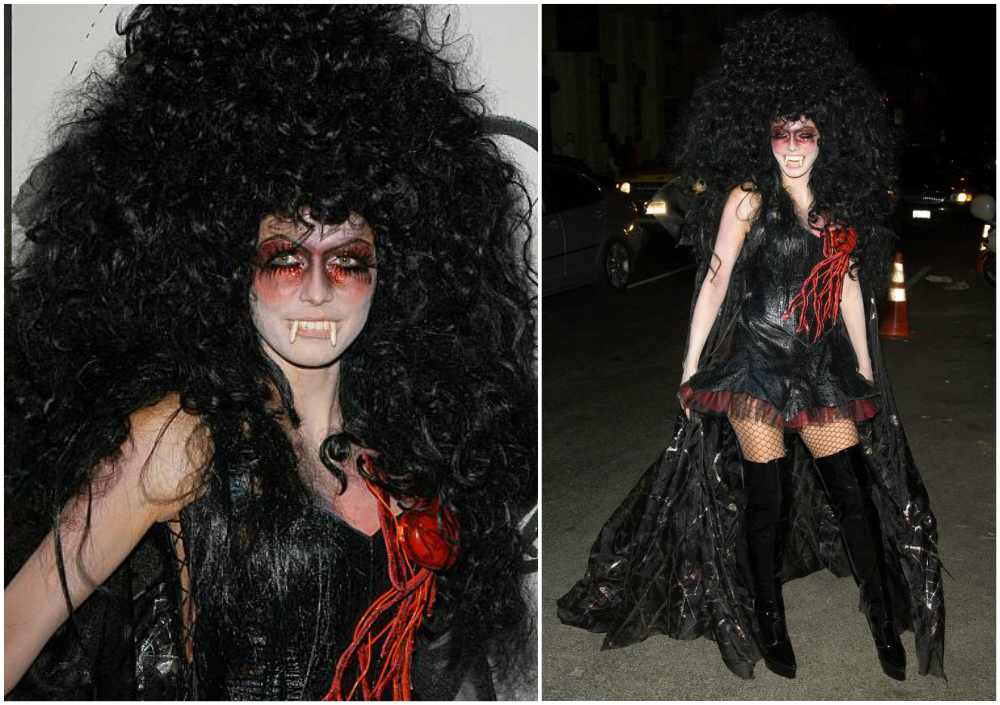 2005 was a bit traditional in sense of costumes. Heidi Klum dressed up as a vampire. Stiletto boots and leather dress along with immense black curly wig and write sharp teeth made Heidi look impressively and convincing. To make the impression stronger, she stuck a bleeding heart on her chest. 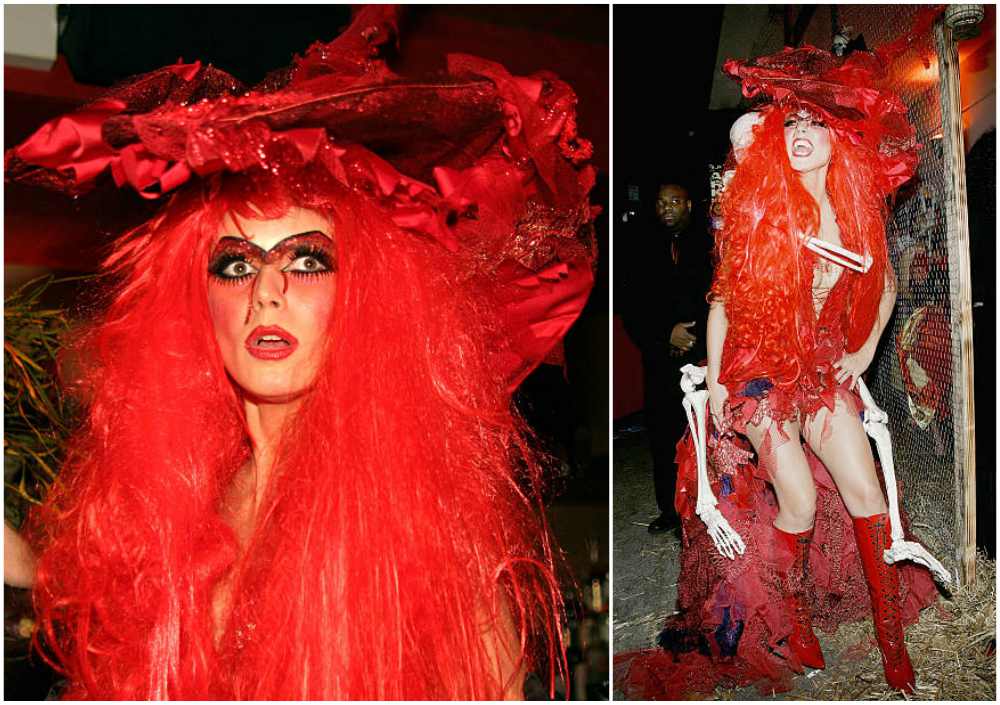 That year, Heidi Klum performed the role of a scarlet witch. Her costume was completely red, as well as her hair, boots, nails and decorations. Moreover, she took an artificial skeleton and put it on her back. She also planned to get to the celebration flying as a witch, but finally refused the idea. 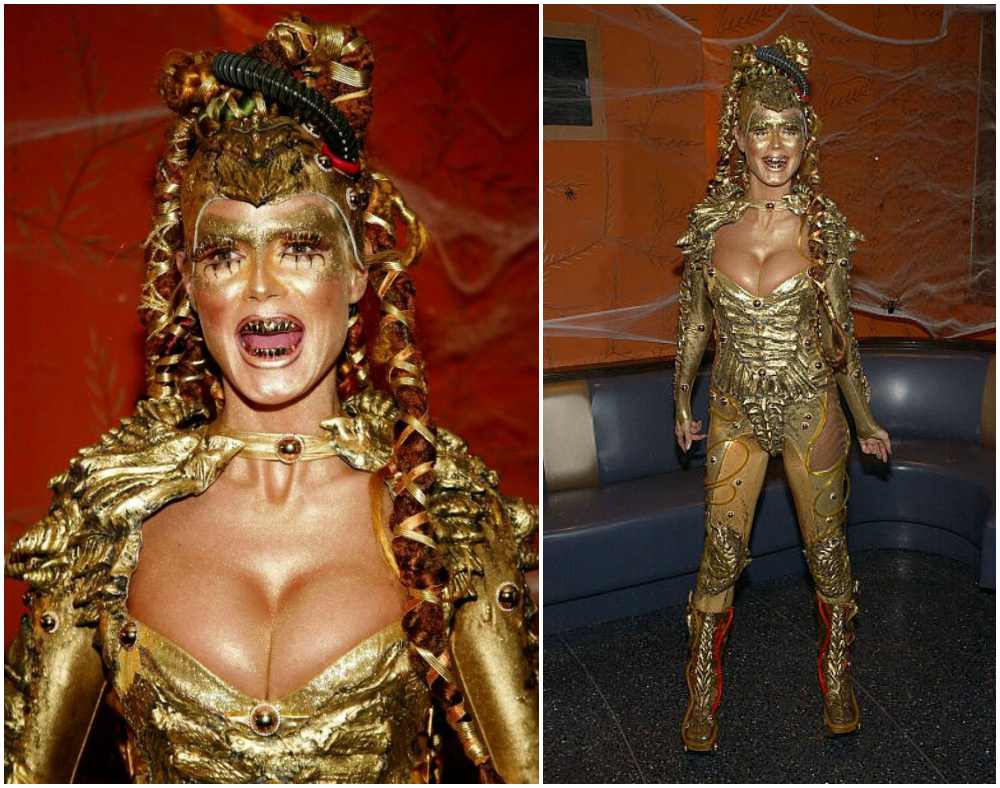 It is still unclear what the idea of the costume was in 2003, but it was completely golden. Heidi thought about all the details of the costume, so even her teeth were golden. She was a kind of golden alien, wearing golden clothes, boots, having golden hair, skin and teeth. 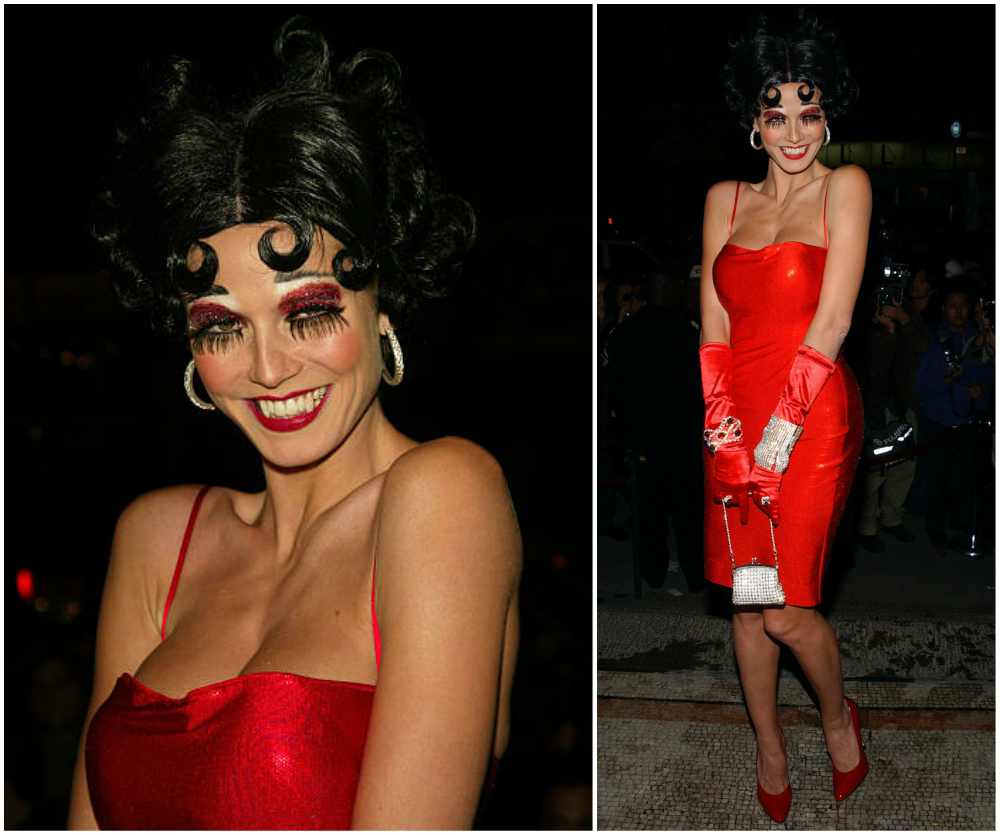 The third Halloween party in her live, Heidi met as a Betty Boop. Though she looked pretty and beautiful, her heroine was scary – she had fangs under her bright red lips. To reproduce a famous cartoon character, Heidi experienced great make-up and hair work. 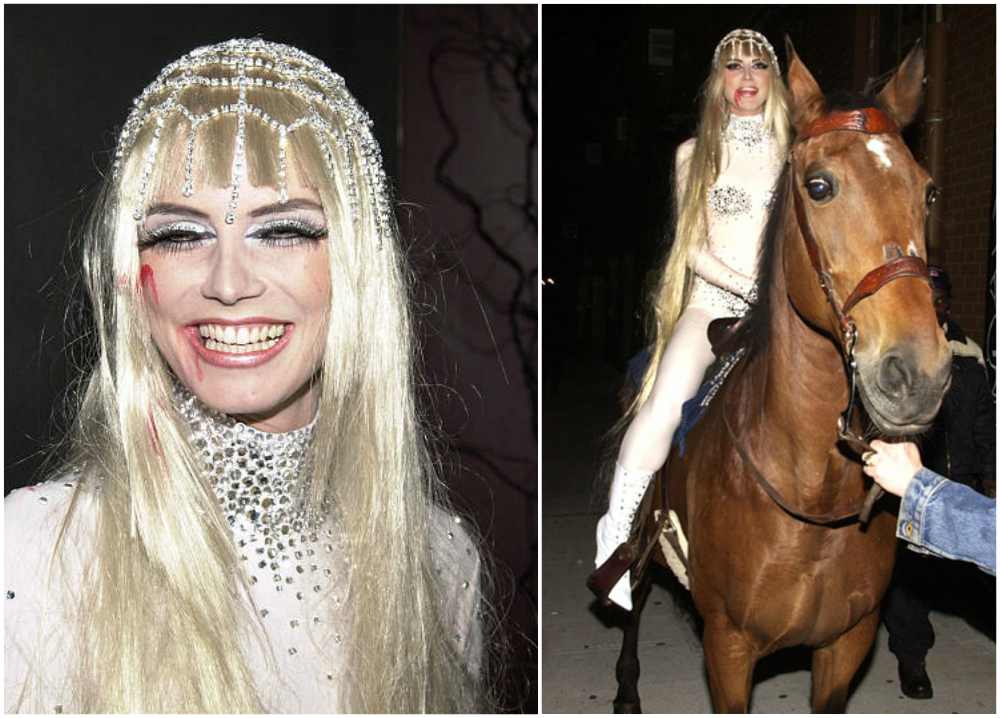 She entered her second party not alone – she was riding a horse. Being a dead Lady Godiva that night she appeared with blood running out of her mouth. The model had a silver wig that reached the floor and wore write costume: leggings, boots, long-sleeved T-shirt and a sparkling decoration on her head. 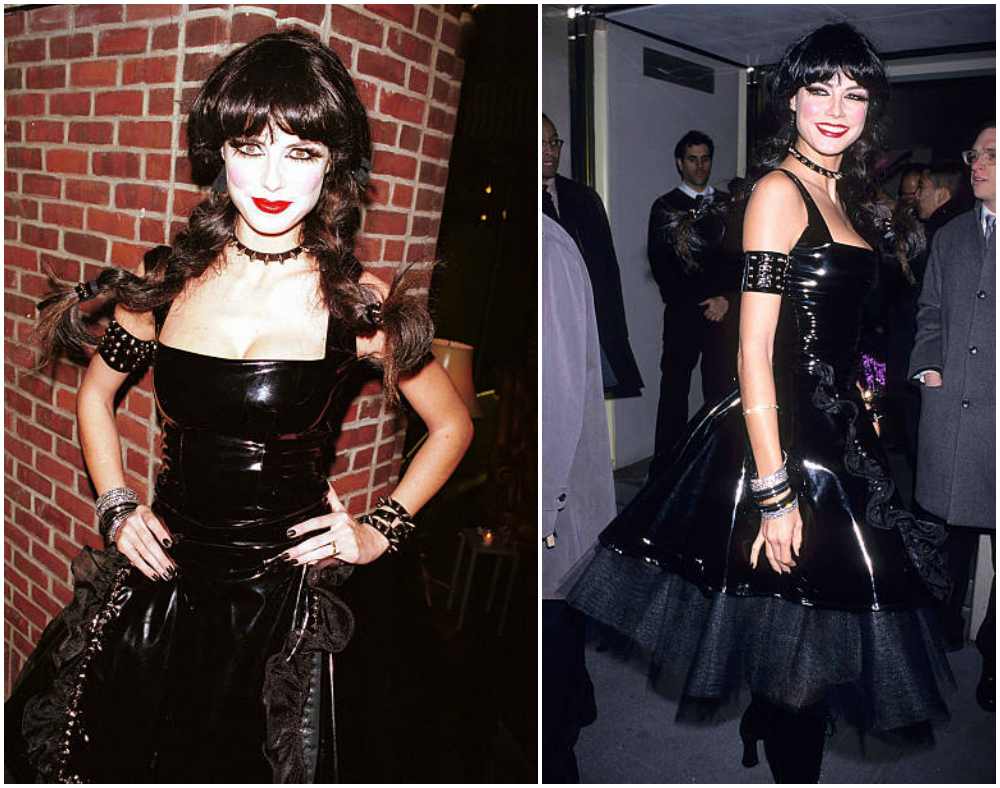 For her first ever Halloween party young Heidi chose the image of a pale leather girl. At that bash she had black hair organized in two braids, her face was covered with white color and her eyes black like a coal. Since that year, Heidi became a committed fan of the holiday for long years. 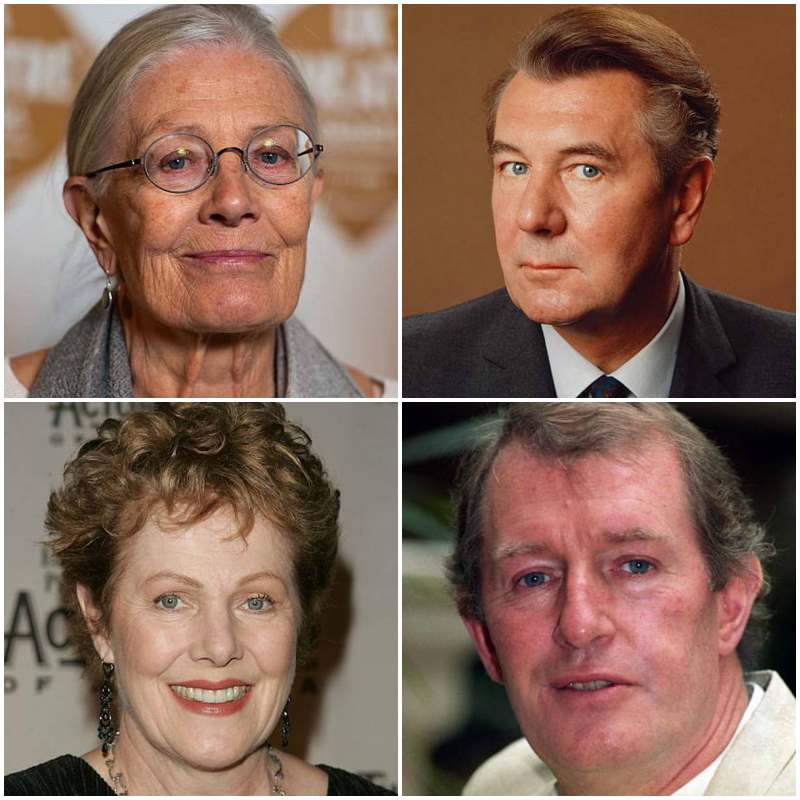 In short: Redgrave family members. The dynasty of actors