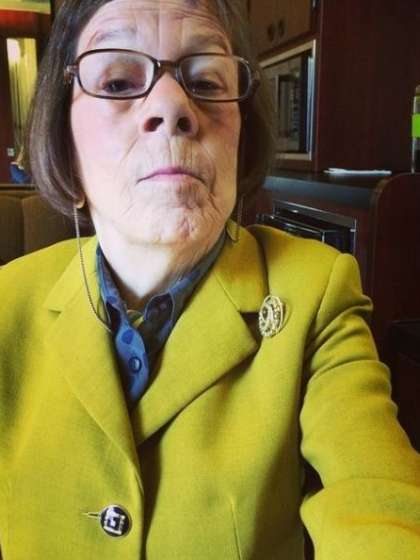 Compare your height to Linda Hunt

Who is Linda Hunt?

Linda Hunt is an actress from the USA.

Before becoming a movie actress, Linda was a theater actress. In 1975, she debuted on Broadway. Only five years later, Hunt got her first movie role – it was in Popeye.

Linda is mostly known for her role in The Year of Living Dangerously. She won the Academy Award for Best Supporting Actress for it.

Then, she starred in the movies Kindergarten Cop, Prêt-à-Porter, Dragonfly, Yours, Mine & Ours, The Singing Revolution, Solo: A Star Wars Story, and TV shows The Practice, Carnivàle, The Unit, NCIS: Los Angeles, and more.

The actress is straight. She has been married to psychotherapist Karen Kline since 2008. But the two started their relationship back in 1978. They have no children.

She appeared in Morristown, New Jersey, in the family of Raymond Davy and Elsie Doying Hunt. Her father was the vice president of Harper Fuel Oil. Her mother was a piano teacher. She has an older sister named Marcia.

Hunt is a Christian by religion.

Linda was primarily dreaming of becoming a stage director.

When she was a teenager, she was diagnosed with hypopituitary dwarfism. Her height is 4 feet 9 inches (145 cm).

She became the first person to win an Oscar for playing a character of the opposite sex. Her role in The Year of Living Dangerously was of male Chinese-Australian photographer Billy Kwan.

Linda met the man of her life thanks to her corduroy pants – he immediately paid attention to them and asked her for a date.