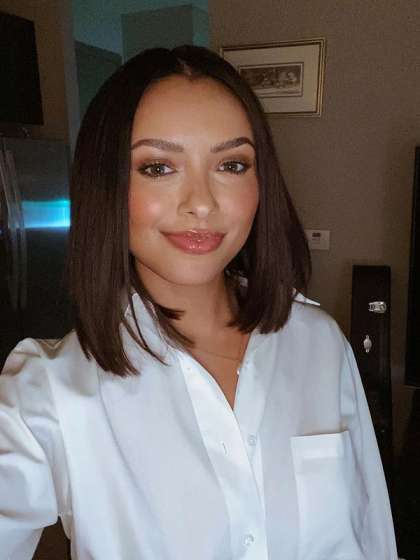 Compare your height to Kat Graham

Who is Kat Graham?

Kat Graham is a popular actress and singer from the USA.

The lady started her career when she was just 6. Her acting debut happened in 1998 – it was the movie The Parent Trap. Kat’s television debut was in 2002 - the Disney Channel teen sitcom Lizzie McGuire.

The actress is best known for her role in the popular TV show The Vampire Diaries alongside Nina Dobrev and Ian Somerhalder. She got the role of teenage witch Bonnie Bennett.

Kat also appeared in Hannah Montana, Stalker, All Eyez on Me, The Roommate and other hit projects.

Kat Graham is straight. She was engaged to Cottrell Guidry from 2012 to 2014. Then, the two called it quits. Later, she was linked to actor Jay Pharoah and cinematographer Darren Genet.

The actress does not have any children.

Kat was born in Geneva, Switzerland. When she was five, she moved to the USA with her mother, Natasha. It was after the woman got divorced from her husband Joseph Graham, a music executive.

She has a half-brother named Yakov.

She speaks English, Spanish, French and Hebrew as well as some Portuguese.

Kat was a background dancer for Bow Wow.

She has a back tattoo in Hebrew.