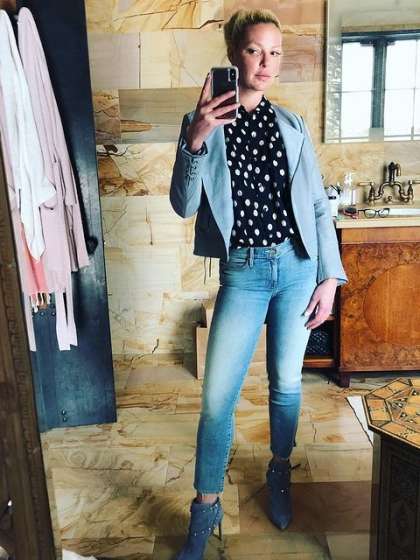 Compare your height to Katherine Heigl

Who is Katherine Heigl?

Katherine Heigl is a famous actress from the USA.

Katherine started her acting career in 1992 – it was the movie That Night.  After that, she dropped her school in pursuit of her career.

In 2005, the actress got the role that gave her world-wide popularity - Dr. Isobel Stevens on ABC's medical drama Grey's Anatomy. She was on the show for five years.

Then, she appeared in Knocked Up, 27 Dresses, The Ugly Truth, New Year’s Eve, and other hit movies. In general, the filmography of this actress has more than 30 films and TV series.

Katherine is straight. She has been married to singer Josh Kelley since 2007. There are three children in the family. They adopted two girls: Nancy in 2009 and Adalaide in 2012. In 2016, the two welcomed a biological child – the boy was named Joshua.

She was born in Washington, USA, in the family of a personal manager (her mother Nancy) and a financial executive (her father Paul). The actress has three siblings.

Heigl was raised in the Mormon faith.

In 1994, she became the Covergirl of Seventeen Magazine.

Heigl is a huge animal rights activist. She is a part of the Jason Debus Heigl Foundation. It rescues large dogs with behavior problems from shelters with a high kill rate and rehabilitates them. It was created to honor her brother. He loved animals very much.

She is a very close friend of Ellen DeGeneres.

One of her siblings, her sister Meg, was adopted from Korea. It inspired her to adopt two kids.