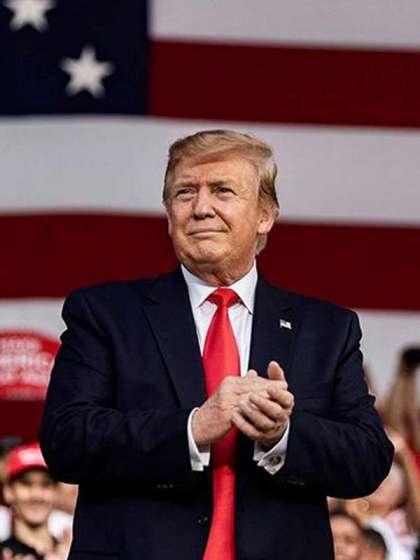 Compare your height to Donald Trump

Who is Donald Trump?

Donald Trump is known across the globe as the president of the United States of America but has amassed his huge fame and fortune as a real estate mogul and TV personality.

He was a student leader and top athlete at New York Military Academy and graduated with an economics degree from University of Pennsylvania School of Finance in 1968.

He joined the family’s real estate business afterwards and in 1980, made a name for himself by opening New York’s Grand Hyatt.

He assumed his office as POTUS in January 2017 but business ventures that has brought him fortune and fame include Trump Tower, Trump University, casinos across Atlantic City, his 2 golf courses, TV shows such as The Apprentice and the Miss USA and Miss Universe beauty pageants. He also wrote 2 bestselling books including the very famous The Art of the Deal.

He has also been the subject of many sexual misconduct allegations and has had questionable affairs with women like Stormy Daniels and Karen McDougal.

He is the 4th child of Frederick and Mary Trump with Marryanne, Fred Jr., Elizabeth and Robert as siblings. His children are Donald Jr., Ivanka, Eric (all 3 with Ivana), Tiffany (with Maria) and Barron (with Melania) and he is grandfather to 4 and counting.

Donald is a Protestant Christian. He was raised by his mother in the Presbyterian Church.

According to Washington Post, it took Trump only 226 days in office to make 10,000 false and misleading claims in his public speeches. The figure stands at 12, 019 as at August 2019.

He is the first sitting POTUS to visit North Korea. He shook hands with Kim Jong-un in 2019.

He is very vocal on his Twitter account, his preferred choice to make press releases due to his dislike for the media.