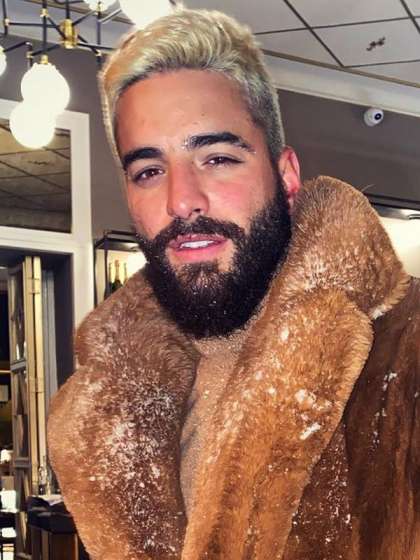 Compare your height to Maluma

Juan Luis Londoño Arias, or Maluma as he is known popularly, is a famed Latin Grammy-winning singer, songwriter and TV personality from Colombia.

Encouraged by his friends, Maluma competed at singing contests in high school and after he wrote a song titled No quiero at 15, his uncle paid a studio to record the song as a birthday gift for him.

His debut single, Farandulera in 2010 received major airplay and led to his first record deal with Sony Music Colombia at the age of 16.

Known for collaborative hits such as Medellín (ft. Madonna) and Chantaje (ft. Shakira), Maluma has many other Billboard top 10 hits such as Corazón, Felices los 4 and La Temperatura.

Maluma is straight. Although he likes to keep his romantic affairs private, he revealed in 2018 that he had been dating Natalia Barulich for a while. He had previously also dated Anitta, Yeinly Castro (both in 2016) and a lady named Belinda for a year in 2014.

Maluma and his big sister, Manuela are children of Luis Londoño and Marlli Arias.

Although Maluma is a publicized Catholic and frequently sports a rosary-esque necklace, he appears to also feed off elements of other forms of religions.

As a child, his love for soccer saw him play competitively for Equidad Sports Club and Atlético National in lower divisions up until high school.

His tenor vocal range and singing style has often been compared to Michael Jackson and Justin Timberlake, both of whom he has called his musical influences.