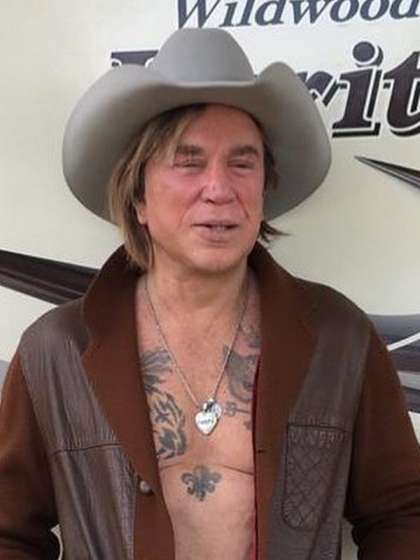 Compare your height to Mickey Rourke

Who is Mickey Rourke?

Mickey Rourke has successfully handled both boxing and an acting career. The actor/retired boxer is also a screenwriter.

As part of the Boys Club of Miami, he took self-defense lessons, focusing specifically on boxing. He earned his debut boxing victory at age 12.

During his first retirement from boxing, he made his feature film debut in the 1976 film, Love in the Hare before appearing in a small role in the 1979 Steven Spielberg film, 1941.

His amateur boxing record is an amazing 12-0-0, 6 being KOs while at pro level, he managed a 6-0-2. At Wrestlemania XXV, he famously took out Chris Jericho with a left hook.

Mickey is straight and has dated a handful of celebs such as Terry Farrell, Sasha Volkova and Bai Ling. His first marriage was with Debra Feuer in 1981 but split 8 years later. He also married Carré Otis in 1992 but split after 6½ years.

He has been dating Anastassija Makarenko since 2009.

He was born Phillip Andre Jr. as the son of Phillip and Annette Rourke with Joey (died 2014) and Patricia as his siblings. He has 5 stepbrothers from his stepdad, Eugene Addis.

He doesn't have kids.

Mickey is devout Catholic. He credits his faith for pulling him through the “dark periods” of his life.

A well-known lover of dogs, especially small breeds, he had 5 chihuahuas that he even paid tribute to during his 2009 Golden Globe award acceptance speech.

He is known as “El Marielito” in the ring. He retired finally in 2014.