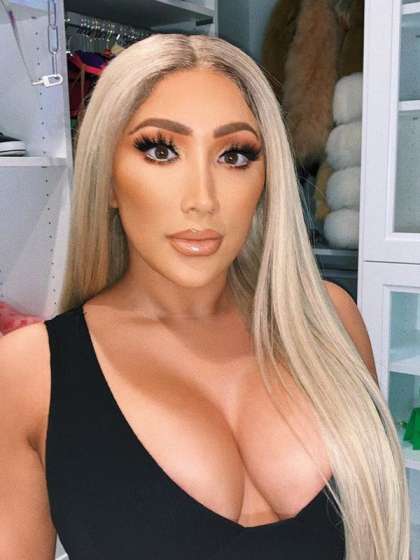 Compare your height to Nikki Mudarris

Who is Nikki Mudarris?

After graduating from USC with a degree in business communication, she worked as a manager of her family’s entertainment investments in Las Vegas and Hollywood.

Her first shot at fame was in 2014 as she was cast in a supporting role during the first 2 seasons of Love & Hip Hop: Hollywood.

She was soon given a main role in Love & Hip Hop: Hollywood from its 3rd season and has starred in 73 episodes until 2018. She also starred in VH1’s Scared Famous in 2017.

As an entrepreneur, she recently launched her own designer lingerie line called Nude by Nikki.

Nikki is bisexual. Some of her well-known relationships have been with Jamal Rashid (Mally Mall), Safaree Samuels, Austin Daye, Lil Fizz and Rosa Acosta.

She has also had affairs with women and men such as Amber Rose, Floyd Mayweather Jr., Quavo and Erica Mena.

Nikki is a daughter of Italian-Arab dad Abu and Moroccan mom Marcelle Mudarris. She is the sister of Monique Mudarris and Omar Mudarris (who sadly died in 2015 of a drug overdose).

The claims cannot be verified but Nikki is reported to be a Christian.

Her family owns a chain of strip clubs called The Body Shop, a business her dad has been running for almost 50 years.

When she was younger, she was not proud of her family’s business, so she would lie that they were into real estate.