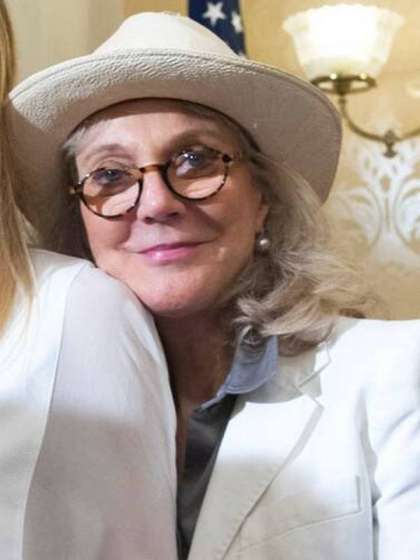 Compare your height to Blythe Danner

Who is Blythe Danner?

Blythe Danner is now known as a veteran screen and stage actress and has had more than 30 years of environmental and health activism under her belt.

She attended the prestigious Bard College and began acting in off-Broadway pieces such as the musical Mata Hari (1967) and the play, Summertree (1968).

Her first award was a Theatre World Award for 1969’s The Miser and in 1970, won a much-coveted Tony Award for Butterflies Are Free.

Blithe is straight and until his death, was married to the man she fell in love with in 1967 Bruce Paltrow. Their beautiful marriage began in 1969 but mouth cancer took Bruce away from her in 2002.

She is the daughter of Harry Sr. and (late) Katherine Danner and has Harry Danner and William Moening as her brothers as well as Dorothy Danner as a sister-in-law.

She became grandmother to Moses and Apple Martin, through her daughter Gwyneth Paltrow’s marriage to Chris Martin. She also has Jake Paltrow as a son.

Although she went to a Quaker school and has been a Christian from birth, she actually practices transcendental meditation.

In 2005, she picked up 3 Emmy nominations, making her the first actress to do so in the same year.

She fluently speaks German, a language she learnt from her mother’s mom.