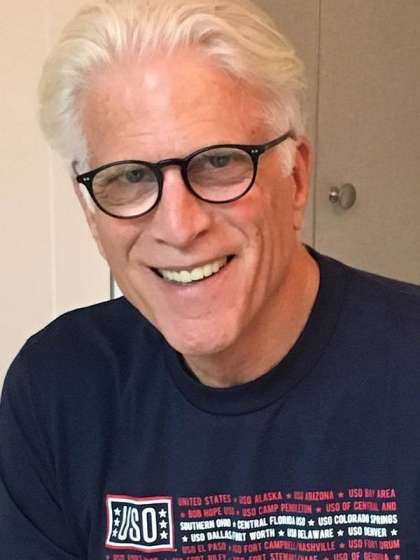 Compare your height to Ted Danson

Who is Ted Danson?

Ted Danson is an actor who has left his sitcom days to taking more serious roles and becoming an author and environmentalist.

Although a high school basketball star, he took a keen interest in acting while at Stanford. He moved to Carnegie Mellon University after just a year and graduated in 1972.

His career was launched as a contract star on Somerset in 1975 but became more involved in the soap, The Doctors (1977-82).

Recently, he starred in CSI: Crime Scene Investigation and CSI: Cyber and in the Good Place (2016-date).

Ted is straight and has for over 20 years been with Mary Steenburgen after their marriage in 1995. He had been married first to Randall Gosch in 1970 until 1975 and then to Cassandra Coates in 1977 but their highly publicized divorce in 1993 cost him $30 million.

Asides these, he was in a high profile extra-marital affair with Whoopi Goldberg from 1992 to 1994.

He and his big sister Jan Haury (Jessica Danson) are kids of Edward and Jessica (MacMaster) Danson (both late).

He is the father of daughters, Kate and Alexis with ex-wife Cassie and is a stepfather to Mary’s kids, Charlie and Lilly McDowell.

Ted’s religious beliefs cannot be determined right now but he has expressed some belief in God. How far this belief goes remains a mystery.

He is very good friends with Bill and Hillary Clinton since Bill was Arkansas governor.

As an environmentalist, he places himself on a vegan diet. He currently is on a pescetarian diet.