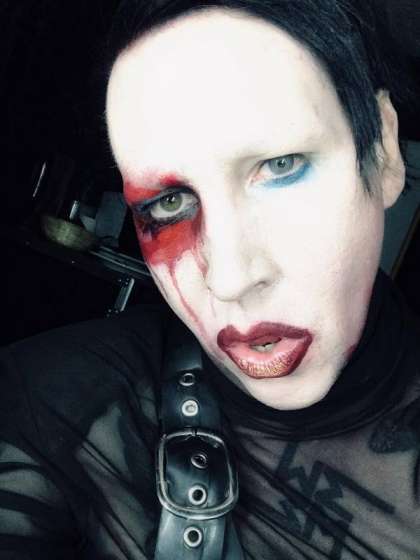 Compare your height to Marilyn Manson

Who is Marilyn Manson?

Marilyn Manson is a former music reporter who has reinvented himself as a rockstar, music producer, visual artist, actor and writer.

He studied journalism and theater at Broward Community College in Florida and while in school, he was writing for music periodical, 25th Parallel.

He also interviewed several musicians in his time before deciding on starting his own band, Marilyn Manson and the Spooky Kids in 1989.

In addition to his already very controversial nature and peculiar appearance and with 4 Grammy nominations to his name, he is most famous for his albums, Antichrist Superstar (1996) and Mechanical Animals (1998).

He has written 4 books to date and has appeared in several films such as Jawbreaker (1999) and Party Monster (2003).

The man is straight. He was married to Dita Von Teese in 2005 after dating since 2001 but they split in 2007. They met after his 2-year engagement to Rose McGowan ended in 2001 after 2 years of dating.

He also dated Evan Rachel Wood in 2007 and got engaged in 2009 but this lasted only a year.

Named Brian Warner at birth, he is the sole child of Hugh Warner and Barbara Jo Wyer (both late now) and has a cousin named Chad.

Although his father is Roman Catholic and his mother raised him an Episcopalian, he got disillusioned with Christianity in the 10th grade. He is now a high-profile Satanist.

He was molested several times by a neighbor when he was a child.

Some of his watercolor paintings have been bought by celebrities.