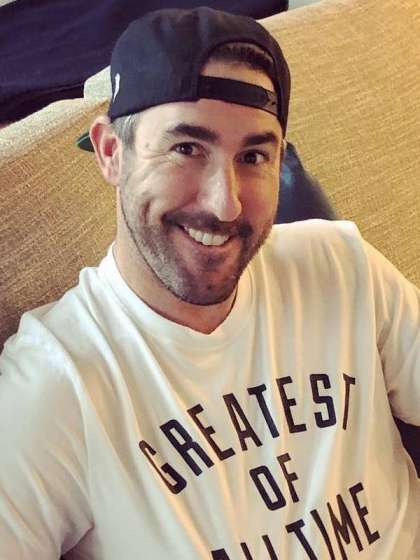 Compare your height to Justin Verlander

Who is Justin Verlander?

Justin Verlander is a baseball player who pitches for the MLB outfit, Houston Astros. He became a World Series champion in 2017.

While playing collegiate baseball for Old Dominion University, he smashed the school’s and CAA’s career strikeouts records, setting it at 151.

He also won a silver medal with the US national team at the Pan American Games in 2003. In 2004, he was drafted into the MLB by the Detroit Tigers.

He was with the Detroit Tigers for 13 seasons until 2017 when he was traded to Houston Astros. In his first season there, he earned a championship ring after their World Series victory against LA Dodgers.

His many accolades include but not limited to All-Star team member (7 times) league strikeout leader (5 times) and no-hitters pitched (twice). In 2011, he was MLB runs, strikeout and ERA leader.

Justin is straight. He has been dating his actress/model sweetheart, Kate Upton since 2014 and they got engaged 2 years later.

In 2017, 2 days after his World Series victory, he and his Kate tied the knots in a beautiful ceremony in Tuscany of Italy.

Justin is the older of the sons of Richard and Kathy Verlander with his only sibling being ex-baseball player, Ben Verlander. He and Kate welcomed a beautiful baby girl in November 2018 named Genevieve.

Although not really outspoken about his faith, it appears that Justin is a Christian.

He is a perfectionist and thinks he may have obsessive-compulsive disorder.

His nickname in high school was Skippy. His middle name however, is Brooks.

He says the strangest thing that has happened to him was a fan in Slovenia recognizing him but not Kate who was beside him.