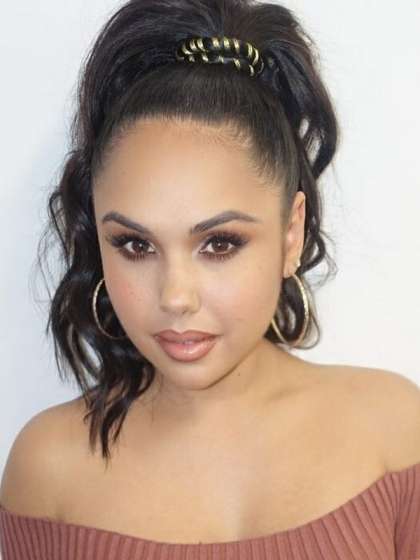 Compare your height to Kristinia DeBarge

Who is Kristinia DeBarge?

Kristinia DeBarge has walked in the light of her father’s footsteps and even further as a singer-songwriter, actress and dancer.

Singing began for her as early as 3 years but got serious about it when she was 12 after she and her father worked on a duet up until 4am.

She was a finalist on American Juniors in 2003.

We cannot verify what Kristinia’s sexual preferences are as she has never revealed this information or any previous relationships to the public.

She is the daughter of singer James DeBarge and has James Jr. and Tori as her siblings. She is a niece to the rest the DeBarge singing group including El DeBarge and she has Adris, Bobby Jr, Andrew, Christian and Janae as cousins.

Kristinia grew up under the guidance of her father who is a devout Christian and her mum who also comes from a very religious Baptist family. It’s hard to think that she’s anything other than a Christian.

Asides film, she has also stars in the reality series, Growing Up Hip Hop since 2016.

She founded her company, Krissy D Cosmetics in September 2018. Her mascara line got sold out within minutes.

She earned a NAACP Image Awards nomination in 2010 for Outstanding New Artist.