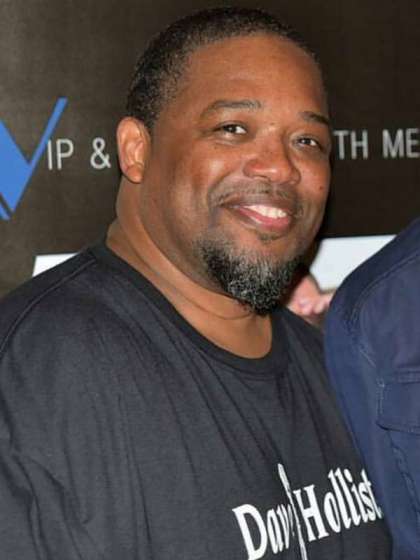 Compare your height to Dave Hollister

Who is Dave Hollister?

Dave Hollister a.k.a The Ghetto Pastor has earned fame across borders as a talented singer. Asides singing, writing songs and producing music, he also has experience acting.

He first gained popularity for featuring on 2Pac’s songs, Keep Ya Head Up and Brenda’s Got a Baby before joining the famous R&B 4-man group of the 90s, Blackstreet in 1993. He later left in 1995 to pursue a solo career.

He is probably best known for songs such as My Favorite Girl and Can’t Stay from his 1999 album as well as One Woman Man from his 2000 album.

Dave is straight. He was previously married to Keisha Hollister. In 2008, he got married to Ayana Hollister since 2008 and they have remained together ever since.

He is a son of preachers Napoleon Hollister and Linda Powell. He has a brother, Ricky and a sister, Amanda Wright.

He is a father of 2 daughters, Karen and LaQuesha Hollister.

He is a cousin to K-Ci and JoJo, Fantasia Barrino and Sherree Brown.

Dave is a practicing Christian. Asides now singing gospel-themed songs, he also became a pastor and has been since 2011.

His recent album, 2016’s The MANuscript was recorded in only 6 days, according to him.

He toured the country in 2016 for the play, Love Jones: The Musical with a few other stars.